Russia is one of the largest car and vehicle makers on Earth. It’s also a major importer.

From finished vehicles to components, and everything in between, there’s an enormous amount of vehicle cargo traffic passing in and out the country.

There exist substantial opportunities for automotive logistics firms to make their mark on vehicle movement in the world’s largest country. But what’s the state of play? Here, we take a look at the sector in a bit more detail.

What is the state of play in Russia’s automotive logistics sector?

While external cars and light vehicles appear to be losing their grasp on Russia’s automotive sector, domestic producers are seeing production volumes increase.

Starting with imports, 2018 actually saw a 10% increase in the number of finished passenger cars and light vehicles. 239,100 units were imported during that year at a value of roughly $7.6bn.

These came from a wide variety of countries around the world. Autostat, Russia’s statistics agency for the automotive sector, states the chief source markets for cars, trucks and vans was Japan, Germany, US, UK, Thailand, Slovakia, Hungary, Turkey, China and Finland.

Imports continue to rise in 2019 too. Autostat data says year-on-year finished vehicle imports have grown 4% between Jan-June 2019. That’s over 143,000 passenger cars. Despite this, truck imports fell a huge 31% during the review period.

While imports of new cars are rising, domestic appetite for them is dropping. Sales dropped 3.6% in February, meaning less cars are rolling out of showrooms and onto the road.

This is in part due to high tariffs on imported vehicles (though they have been dropped to 17%), plus the US/China trade war affecting global vehicle prices through raised tariffs on key-vehicle making metals.

On the other hand, domestic vehicle production is on a rebound, following years of stagnation. A 14% increase in transport vehicles was noted during this time, incorporating passenger cars, commercial vehicles and buses. Altogether, this was a total of 1.7m new vehicles being built in Russia.

What’s the takeaway here? Firstly, it’s that rising costs of imported cars could potentially result in less demand going forward via sales dropping off. If this is the case, then it’s likely Russia-made vehicles will fill the gap.

From a logistics standpoint, that could mean more demand for moving vehicles internally, rather than import-related services. But, as we’ll touch on later, the influence of China and Eastern car manufacturers may yet prop up the import and transhipment segment of Russia’s automotive logistics sector. As imports rise, and internal sales stagnate, exports are looking healthy for Russia’s domestic producers and international manufacturers with production bases there, such as Renault. Otherwise production comes from long time Russian manufacturers like KAMAZ, GAZ, AvtoVAZ, UAZ and NAMI.

Many of these also construct foreign marques under license. For instance, Ford Sollers is a joint venture between Ford and Russia’s Sollers.

These companies are a source of both import and export activity, but we’re focussing on exports here.

Export of passenger cars in the first six months of 2019 has increased 25.9% y-on-y. 54,500 cars worth $762m were exported from Russia to foreign markets at this time. Alongside this, a 2.8% increase in truck exports was noted, running counter to the import dearth, with 6,200 trucks leaving Russia.

Components and parts are also a lucrative business for Russian auto exporters, thus of attention to shippers searching for their own slice of this market.

Exports of such goods, such as engines, suspension coils, exhausts and manifolds, and so on, have been picking up. Russia’s Ministry of Industry and Trade says these exports are worth over $2.3bn a year.

Indeed, their importance is such that the Russian government is willing to reimburse part of the logistics costs associated with vehicle components. In 2018, the government issued $100m towards this end.

61% of all components are destined for assembly plants within the Eurasian Economic Union, whereas 25% are shipped to South America. 6% is delivered to the EU, with the rest exported to Africa, the Middle East and India.

Based on the above, a multi-modal approach, combining truck, rail, and maritime transport, is required to service Russian vehicle component exports.

In terms of units exported, it varies from company to company. AvtoVAZ, Russia’s largest carmaker, now exports over 546,000 engines annually. Ford Sollers offers 100 different product lines for export, shipping around 120,000 units annually. Renault’s Russian operations, have risen 330% in value in recent years, signalling its rising activity in this sector too.

For 3pl and 4pl logistics providers, this is certainly a market segment worth monitoring in Russia. Such is the potential for this market that government subsidised logistics terminals are cropping up in large numbers to facilitate export growth.

How do Russian carmakers ship their vehicles? 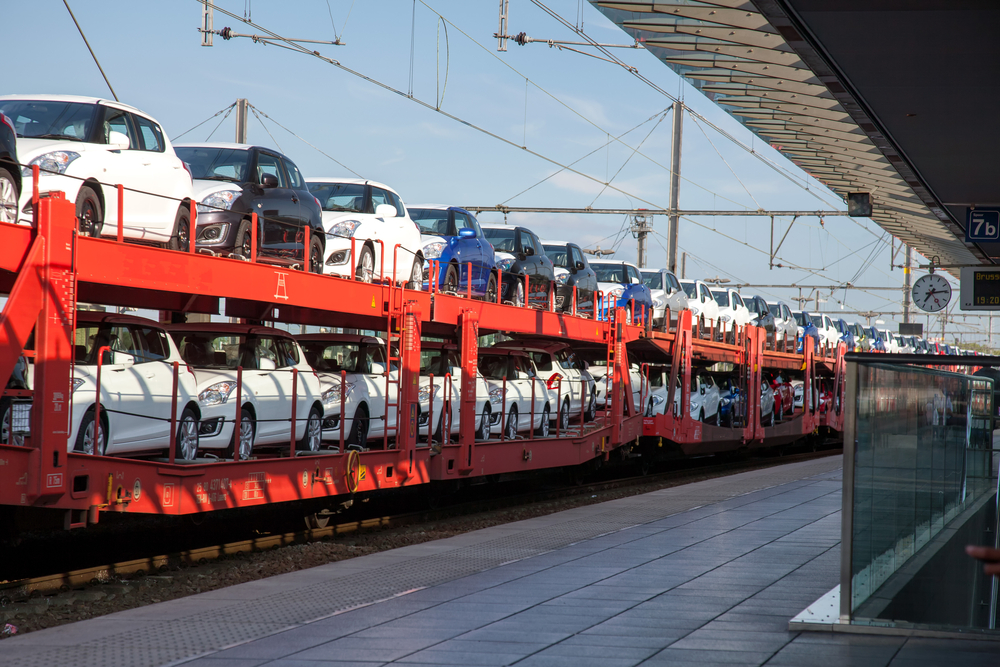 This depends entirely on the location of the production plant and final destination, be that a port, logistics terminal, or dealership. For example, for plants located in the European half of Russia, west of the Urals, 75-80% of vehicles will be delivered on road carriers.

For finished vehicles built in Siberia or the Far East, then rail is the go-to transport mode; either on dedicated car/vehicle transporter trains or via container. If destined for maritime shipping, finished vehicles will be transferred to ship via Ro-Ro operations or container line. Otherwise, they will stick with rail.

Rail is one of the most viable option for international transport – particularly as Russia grabs its own part of China’s New Silk Road project. Many companies, for example Porsche, will be utilising Europe-China rail links to move vehicles in and out of China, which is the largest vehicle market in the world.

As such, companies like RZD logistics are intent on beefing up Russia’s rail offer as a key link in international vehicle movement. Russia’s top rail transporter’s automotive logistics wing is currently running up to 30 trains a month to cater from increased import/export demand from China.

In 2018, for instance, RZD via its subsidiary Far East Land Bridge moved 9,000 cars via rail container from Europe to China, and reverse. Alongside this, the company transported a further 5,000 40ft containers full of components and spare parts.

For carriers operating out of the Far East, the Chinese and Asian markets will gain further prominence into the next decade. Road, rail and Ro-Ro companies working there are now eligible for further logistics subsidies from the government.

But the big takeaway for transporters is that a combined-modal approach is necessary when shipping cars, trucks and other vehicles around Russia. The nation’s epic size necessitates a mix of transport modes.


As Russia’s only international transport and logistics exhibition, this is an event you want to mark in your calendar for 2020. For exhibitors, you can meet nearly 17,000 cargo owners freight forwarders, retailers and others in need of transportation services and technologies on the Russian market.

Visitors are primed for purchasing, and more than two thirds will only attend TransRussia amongst industry events.

Book your stand today and get ahead of your competitors in the market.

To find out more, contact our team for more information on this industry-leading international event.
Back